Local Dover district Green party members joined other local folk and campaigners across Kent on a day of action on Sun 28 November, ‘Save Kent’s Green Spaces’.

Thirty communities across Kent took part in this big event, disgusted at the mis-use of the planning system. Of the 13 District / Borough councils in Kent, which have power as Local Planning Authorities , the 10 Conservative-led councils are coming in for many complaints from these community groups for caving in to central Conservative government decisions.

Here in Dover, the protest took place north of Sholden, at Cottington Lakes where a very well known Kent developer (who has a record of making 5 figure donations to Kent Conservative parties) plans to build 975 new homes, around an SSSI (Site of Special Scientific Interest). Early plans from the developer show only a quarter of the development is for young families, so 75% will be for older folks fleeing London’s corrupt property market or for financial speculation. Cottington Lakes is close to Finglesham where there were huge local protests in 2019 when this same developer proposed to build a 3000 house new town. We Greens were part of the Save Finglesham Fields campaign. 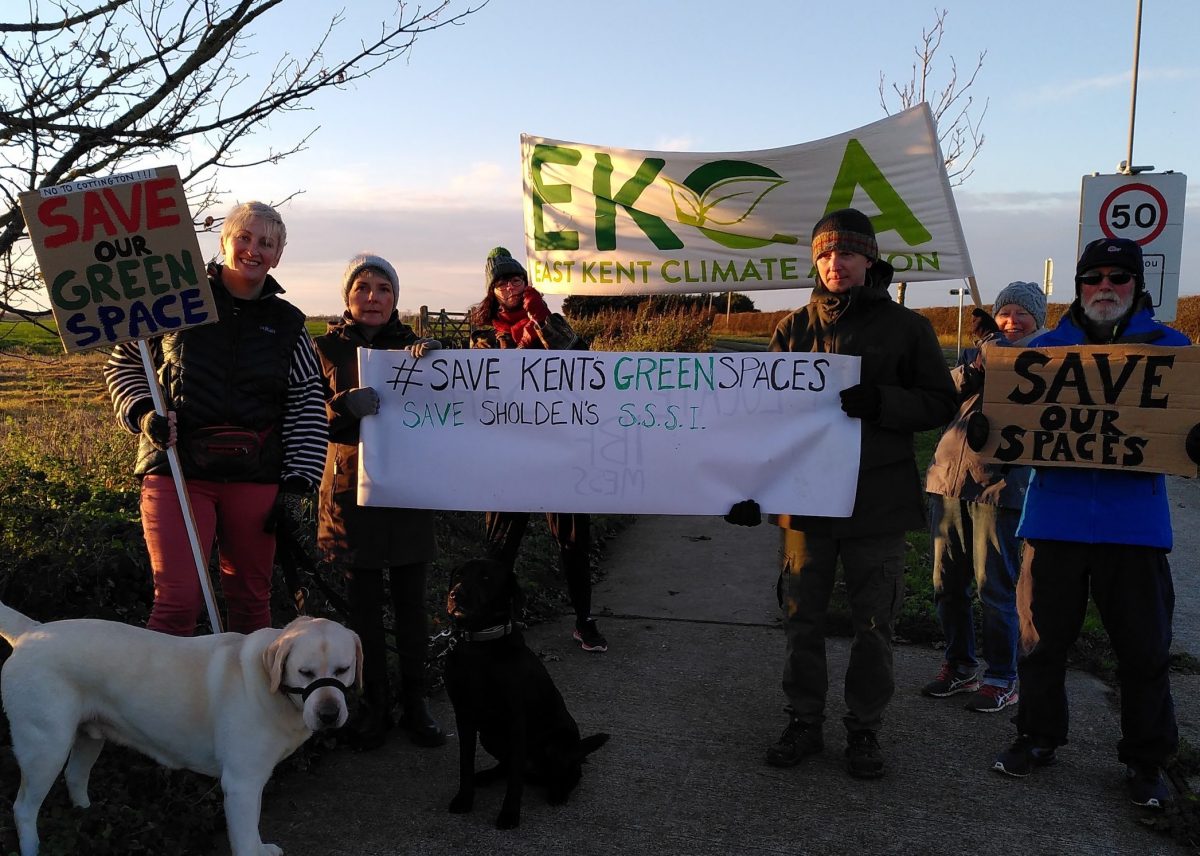 Kent residents are crying out for less deceit and much more honesty in planning processes, this includes Dover District. East Kent is not getting, either the low energy, genuinely affordable and cheap-to-rent homes in towns that local families need;  nor the protection of its food-producing, carbon-absorbing, wildlife-harbouring countryside we also need. The reason is the influence of the big money of big developers that has shot up this decade, the influence that has been exposed repeatedly since 2018. In 2021 Transparency Intl UK published a report showing how national housing policy is shaped by the big developers from whom the Conservative Party received a fifth of its donations 2010-2020.

In many borough councils outside Kent, planning regulations have been adopted to make all new homes low or zero carbon, Reading BC is an example*, but in attractive Kent, which high-profit developers focus on, council planners are discouraged by developers from ruling that 30% of building within town boundaries be affordable, bleating about viability. Discouraged too from planning low-carbon building because it also would reduce profit margins below 28%. Records also show how big developers promise X, Y and Z to get planning permission, but often two or 3 years later, ask planning committees to remove the planning conditions requiring X, Y and Z protections for local services and environment. This is more likely to happen if some members of planning committees have friends in the development business.

Another report from Transparency Intl UK, says we need "increased transparency (=less hidden agendas), tighter rules, strengthened oversight", in its 2020 report 'Permission accomplished: assessing corruption risks in local government planning'. These are the issues behind action taken by 30 communities in Kent on 28 Nov, Save Kent’s Green Spaces.  Don’t we all agree, less deceit, more honesty is much needed?

This article based on a letter by Sarah Gleave, of Dover and Deal Green Party, published in the Mercury  15 Dec 2021