Yet another weekend of gridlock and danger for Dover and surounding villages. Danger
because emergency vehicles can't get about, and danger to local livelihoods and businesses
Gridlock and danger because of a combination of predictable problems that Conservatives in
power in London, at KCC and at DDC have failed for years to head-off when warned.

The combination of problems creating the omni-shambles in East Kent includes deregulating
workers rights so that P&O Ferries owners feel they can get away with mass sackings, and think
they can allow vessels to put to sea without safety checks; but safety matters, so the 3 P&0
ferries continue out-of-action.

It includes the extra red tape for exports that has been causing extra TAP queues for months,
extra stink for Aycliffe and elsewhere, loss of income for exporters and for hauliers.
It includes a customs computer meltdown last week; the vulnerability of the IT systems is some-
thing professionals have been warning of for years, see the National Audit Office reports
It includes an entirely predictable large number of Brits desperate to get away for a much
needed break with Easter falling late this year.

It includes a gross failure to install toilets along the M/A20 or in Dover town (which has less
than half as many loos per head of population compared to other East Kent towns, see our Green
Party petition of 2020). With KCC's Operation Brock redirecting all cars from East Kent coast
to Sevington to board Eurotunnel, it keeps more cars on the roads for longer. 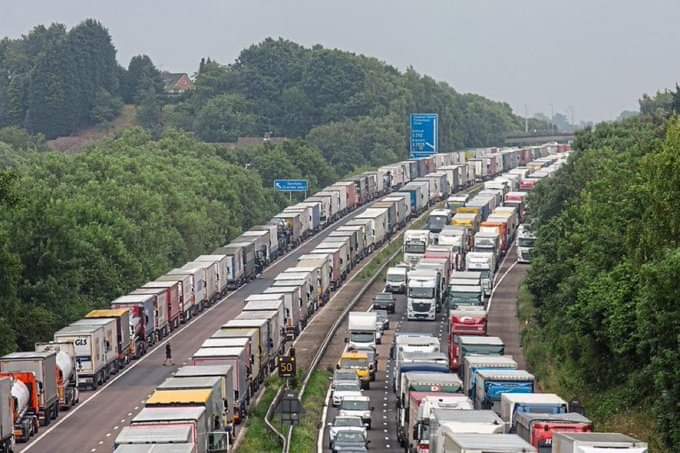 A number of the warnings were discussed at a DDC scrutiny meeting in November 2018,
following the traffic analysis carried out by Imperial College published March 2018. However
much DDC leaders suggest we be prepared', there is reason to expect more lost weekends in
Dover, this year and next.

The Dover IBF at Whitfield is going ahead closer to the town than many of us think is sensible,
given the impact of traffic jams on the town that we have now. Conservative DDC cabinet failed
to stand up to central Conservative Dept for Transport in February 2021 at their extraordinary
council meeting, they rolled over, instead of pushing for re-location where the A2 is dualled.
There was a similar failure to use negotiating leverage with HMRC by KCC on 18 March 2021.

Almost all of the aspects of the traffic mayhem could and should have been prevented by those
in power. The only problem beyond their control were the gales on 1st April that put a DFDS
ferry out of service briefly.

Let's thank DFDS and Eurotunnel and Stagecoach buses for all the extra work they've put in
this month. But seriously, we've all put up with this complacent mess-making Conservative
party ruling Kent for long enough. Let's all get out and vote for non-conservative candidates
next time round, new councillors are sure to make a better job of sorting our toilets, our roads,
our ferries, (and our breweries).